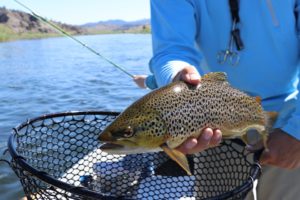 5 Fish Biting in December Near Sarasota

Among all of the holiday parties and events, we hope that you’re still getting out on your boat to go fishing this month! The great thing about our area is that there are always fish biting, no matter what time of year it is. Here are five fish biting in December near Sarasota:

When you spot a buoy, channel marker or other floating objects in Sarasota waters, you’re bound to find a tripletail! Known for gravitating toward floating objects, you can specifically find tripletail in brackish water bays and estuaries. They’re also known for camouflaging, so you might need to do a double take when you see weeds or debris in the water. Depending on their surroundings, they could be black to yellow to white and spotted brown! The key to catching them? Use live shrimp on minimal tackle.

Found in concentrated areas with vegetation, speckled trout—or spotted seatrout—can be seen wading in seagrass beds, sand bottoms and mangroves. Spot them by their silver-ish bodies and black spots on their backs. These are best reeled in with free-line live shrimp or pigfish. Then, as long as they are 15–20 inches long, you can bring these home for a tasty dinner!

You’re in luck because recreational season is reopening for red snapper this weekend from Dec. 8–10! Individual anglers are permitted one fish per day with no minimum size limits. As you might have guessed, red snapper’s bodies are a light reddish color with a white belly. Red snapper are best found when the waters are calm and between 60 and 300 feet deep. Your best tactic to catch them is by drifting since they are not known for moving often.

Did you know that the largest Kingfish can be 100 pounds? It’s no surprise that kingfish is also known as the King Mackerel and the largest of its kind to find in our state. Because kingfish have an appetite for schooling baitfish, blue runner, goggle eye and white mullet are known to be successful. Just make sure to hold on to your rods because they are fast and often will take up to 200 yards of your line when the fight starts! You’ll find the largest kingfish in reefs out in 300 feet of water.

Recreational gag grouper season continues through the end of the month! Another fish biting in December, you can easily spot gag grouper because of its grayish-brown body with wavy markings. One of the more aggressive striking fish, gag grouper can be successfully caught with live baitfish when drifting, trolling or still fishing. Live baitfish can include pilchards, pinfish or sand perch. Regulations state that the minimum length must be 24 inches, and anglers can only keep a maximum of two gag grouper per day.

Next: 5 Sportfish You’ll Find in Sarasota